my sweet Nikki - a tale of rescue and love...

my sweet Nikki - a tale of rescue and love...

I was given a Blue Indian Ring neck by a kind man, whom had a son grow into his teenage years and he begun to terrorize the bird. He would blow smoke on her, poke her with a stick, and simply stress the bird out repeatedly.

The father had enough and made a post on a local forum giving the bird away to a good home, I answer the post and so did several others and I was the lucky one that got chosen.

When Nikki arrived at my house this is how she looked, she usually sat with her head low and ready to charge and bite, I believe she sat in this manner in a attempt to defend herself from the abusive treatment she was receiving...

you will notice her feathers are ruffled and look rather odd, you can see she is stressed, and her color was very poor.. 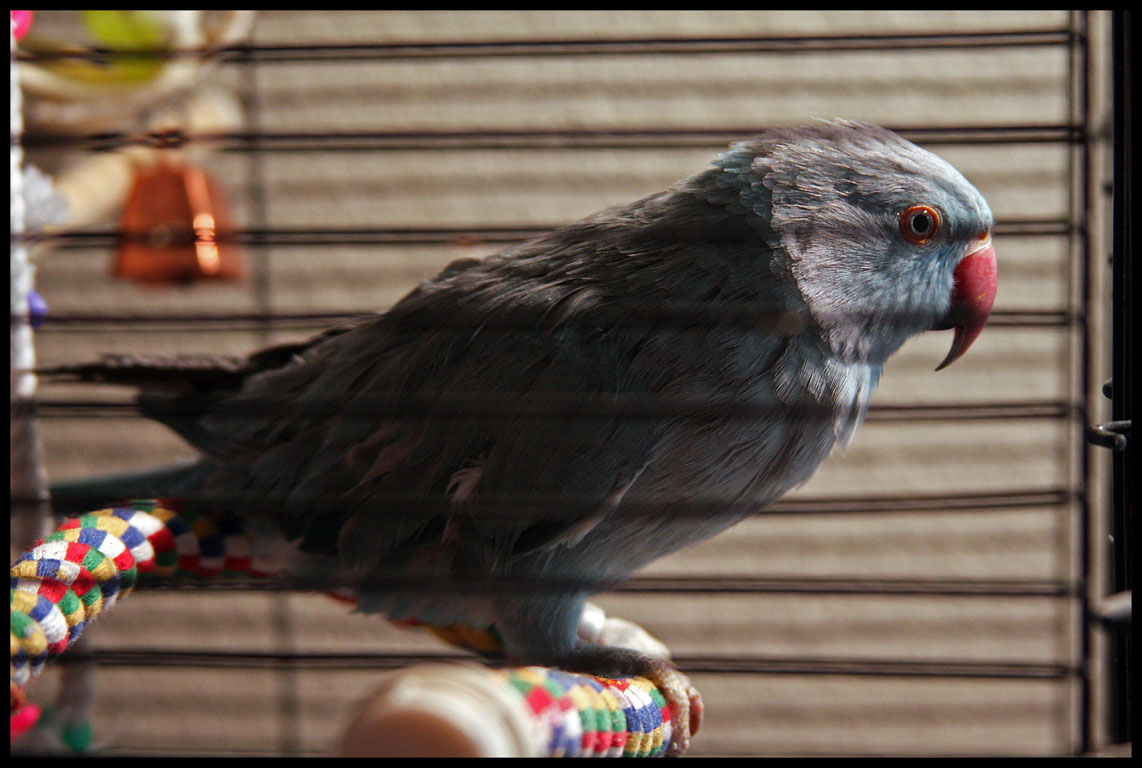 Nikki just hated humans, and she would lunge and attack and charge at the site of us. If anybody got next to her cage she would attack one of her many toys and swing her head in a rapid fashion in a attempt I believe to scare us off.

I could see phyiscal trama to her but I always wondered what emotional damage had been done and if she could ever be normal.. I longed to hold this precious creature but she wouldn't have it...

I fed her cockatail seeds as that was what she was used to as well as fresh fruit on a daily basis, and bread and sometimes white chicken meat, she had no issues taking in her claw what was offered, would eat and go back to charging and attacking, in a low stance, shaking with her eyes doing funny things..

as time went on Nikki got somewhat better, she started to regain her color, her feathers started looking more natural. I bought her a large large cage, as she spent 8 years in a rather small finch type bird cage.

I tell Nikki on a daily basis how much I love her and would never hurt her, I play music for her, a very special song called 'Rescue Me' that she enjoys very much, 1st time she heard this song she began mumbling words. The previous owner said she could speak but hadn't in years..

these images were shot of her yesterday, after owning her for 4 months:

As you can see Nikki now has her wonderful color back. She has full flight feathers and has got out of her cage and flown around my house, probably for the 1st time in many years of her life.

Just today, Nikki was on the loose on my couch (which she quickly pooped on)..

I extended my hand to her, I was very nervous and shaking, and so was she..... this is what happened, for the 1st time since I owned her and it had probably been years for her since she last did this...

She lovingly made herself at home, as I was getting a kiss from my Lorie, my precious little Lucy: 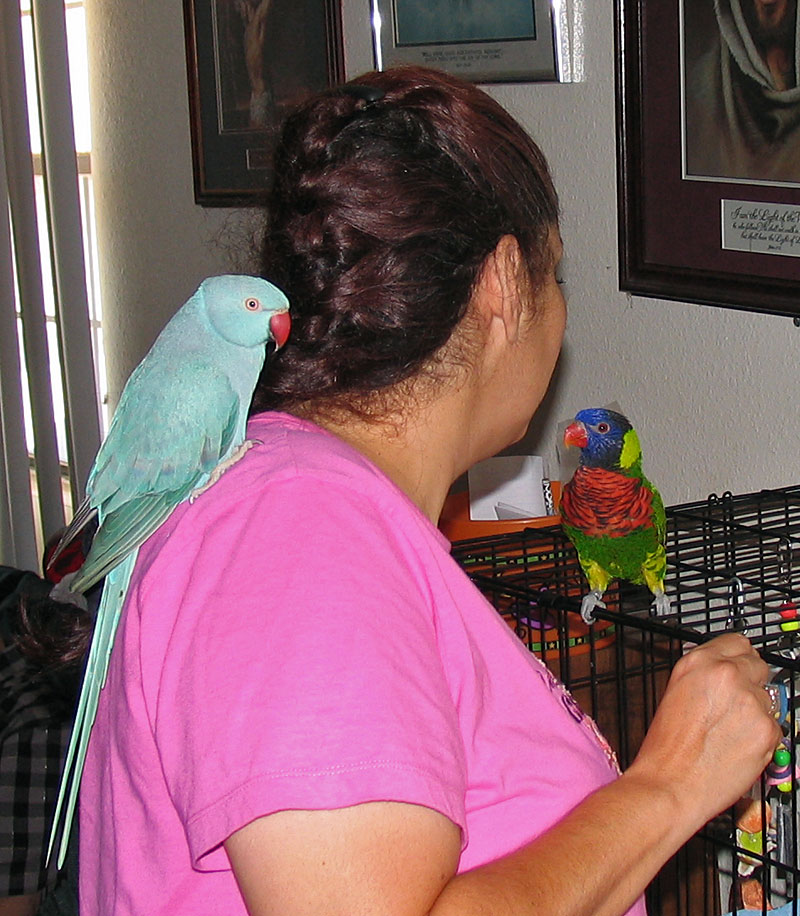 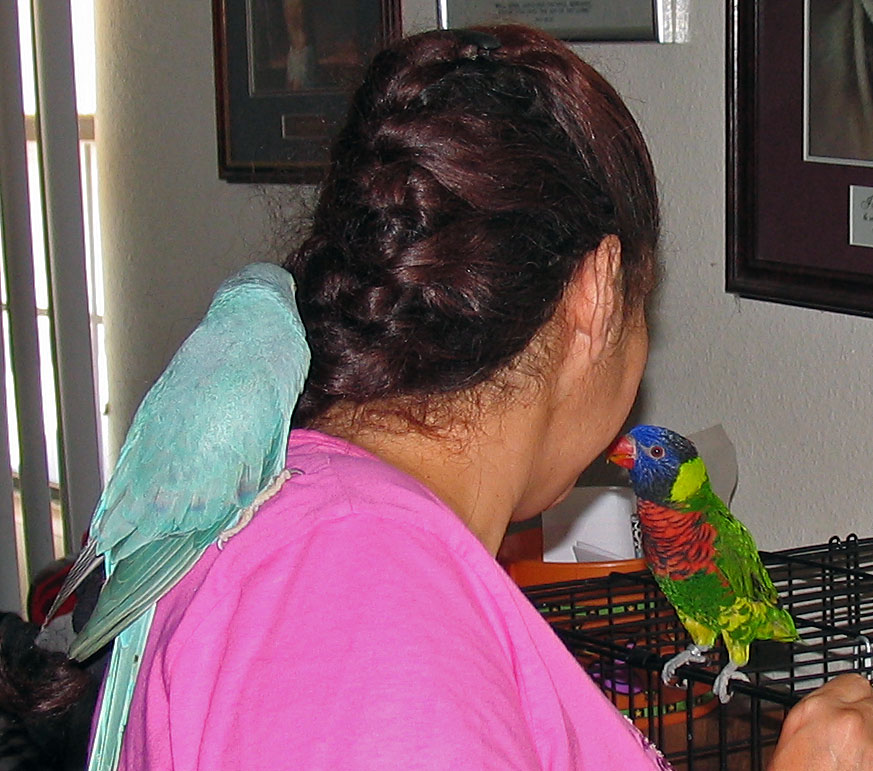 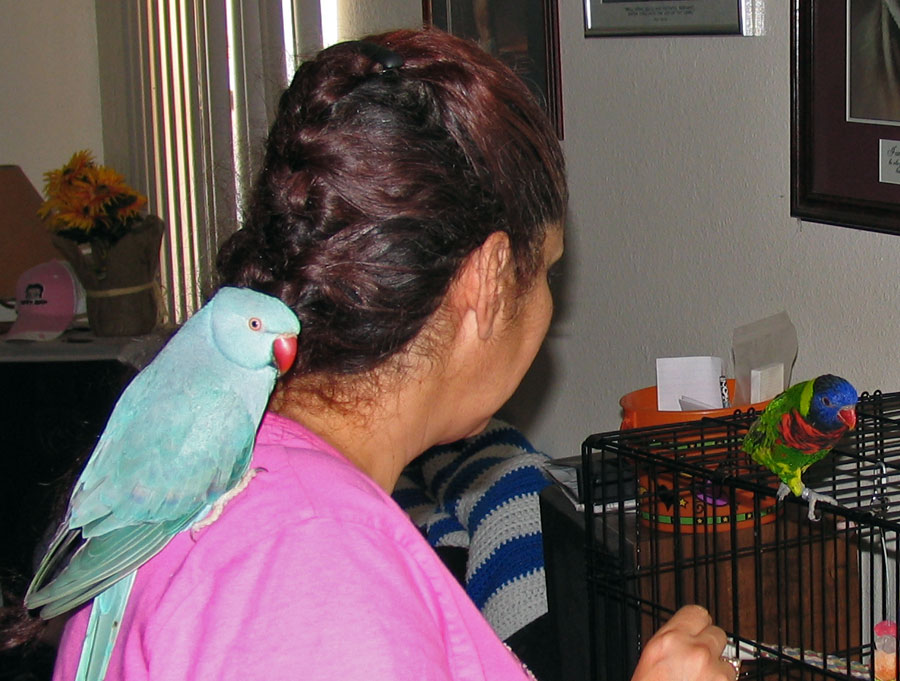 today is a very happy day for me and Nikki, but much work remains with her... she is my baby now....
Top

what a horrible boy tourturing her

But sounds like she is in the best place now

OMG what a poor poor site of a bird.

I did not recognise her as the same bird.

She looked like such a sad bird in the first 2 pics, "given up on hope" look.

What a marvelous job you have down with her, WELL DONE!!!!!

She is definately in a much much better place. Congrats to you for taking in this poor bird and giving her a home.

Lucky the father had enough sense to look for a new loving home for Nikki.

Just goes to show what a lot of love and care can do.

You both have come a long way in just a short time.

You should be proud of your efforts and of Nikkis trust in you.

By the way, Nikki is a beautiful bird.

I don't know you or Nikki personally, but I feel so happy after reading and seeing the transformation.

WWWOOOOWWWW!!! i had to scroll up and down a few times to look to see if it was actually the same bird in those pictures!

what an AMAZING job you have done! Nikki is so lucky she has you and im sure she knows it. You should send a picture of Nikki to the guy you got her from so he can show his son. What a sick and twisted individual his son is. I despise anybody that treats animals like he did. I hope Nikki bit him very hard. poor little baby
Top

You have done a very good thing and may God bless you big time for it. I have done the same thing for three of my 6 birds my newest being a Congo African Grey. I have had her for 9 months now and she is finally just starting to trust again. It is so rewarding when you finally earn the love of a rescue bird they will love you forever and return all the love you gave them 100 fold Karma to you for the wonderful thing that you've done.

You have saved her life. She looked as if she would have been gone pretty soon. I hope you both have a great close relationship.
Allie
Top

I am so thankful this bird got a good home you sure can see she is a happy one now so pretty. Thank you for giving such a beautiful bird a good home you are a blessing.... some videos would be neat to see. I am glad she is now sitting on your shoulder too she loves you.
Park outside where the air is cool...
Top

Thank goodness you saw the ad and were chosen.

We need more people in the world like you

I hate cruelty to animals and will not stand for it! Its so good when you can read about someone making a difference in another pets life! Well done! i wish you well with Nikki and am very pleased that she has come around!!!! I have never adopted a mistreated bird before but i have with my cay 'knackers'. He used to live in the drain outside me and my partners house we used to rent. My neighbour said that the poeple at the back of him used to own him when he was a kitten. they moved house and left him there! My neighbour said they lived like ferrals! it took us a good six moths to gain his trust and take food from my hands! He was so scrwany looking and apparently he was beaten and very mistreated! One night when i was feeding him i grabbed him and took him into my garage to sleep for the night. He was very scared when i managed to pick him up and take him into the house! It was a very stormy night as well and i just could not bare the fact that he would spend the night out in a bad storm! I made him a bed out of old sheets and pillows. Since that night of keeping him in our garage he has not left my side since! He has grown into a beautifull cat with a loving personality. He snuggles with me and night and i believe he is very gratefull to have his new home with loving owners. We moved house one year after addopting him and was very worried how he would react with a new 'neihgbourhood'. It has been a positive move and he always greets me at my car when i get home from work!

I am happy and gratefull that you have made a difference in Nikki's life! She is very beautifull!

So, sooo wonderful. That first picture is truly hard to see. Poor little soul. And there are so many out there that need a human like you. Bless you.
Top

What a fabulous story and huge kudos to you and what you did to help Nikki... the difference is like day and night!
Keep up the great work and keep us posted!

I notice this was posted in 2008... I'm wondering if there are any photos or stories of Nikki now.

I'd love to hear more.... I had tears streaming down my face after reading that one! I'm so glad the story has a happy twist.

I had tears in my eyes reading about how scared she was of you at first and seeing those awful pictures :( but she looks SO beautiful now! Well done :) we need more people like you in this world.
Top

me too... eyes welled up i tears...
and i'd love to hear more about nikki now!

i didnt recognize the bird at all! it was like those before-and-after pictures that you see of miracles!
was scrolling up and down up and down. you'r an angel to him, and he knows that very well. and now, so do we!

God bless you. if only more people were like you. that son deserved all the hard bites that nikki delivered!

wow what a change she is beautiful now

you did a fantastic job with her

That is such a touching story, and the difference in her appearance is amazing!
I work in a vet hospital so I see things like this from time to time, and it's always fun to see the animal turn around and become happy with their new home and new owner.
I wish you and Nikki the best of luck!